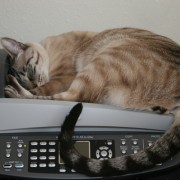 Would you ever tell someone to
watch your lifestyle and imitate
all that you do?

Think about it:
Your words.
What you watch on TV.
How you spend your money.
Your reactions.
How you vote.
What you choose to fight for.
Your reading material.
What you post on social media.
Every part of your life . . .
being imitated by others!

That’s exactly what the apostle Paul
told the Corinthians to do.

Do you get it?
Paul lived in such union with God
that imitating Paul would be like imitating God.

As sold-out disciples—
people who are living in radical obedience
to the Lordship of Jesus Christ—
shouldn’t we be able to say the same thing?

What if we could say this to our teens:
“Hey, I know life is tough. I realize you’re trying
to follow Christ . . . that you don’t understand
all the Bible is telling you . . . you’re still navigating
your way through Christianity and you’re wobbling.
So to make it easier, just copy me. Can you do that?
I’ll live the life of Christ right in front of you, OK?
Though you don’t understand all of Christianity yet,
just keep watching me and imitate everything I say and do,
because I’m imitating God. So as you copy me, you’ll actually
be copying God Himself.”

THAT’s what Paul was saying.
Why aren’t we saying the same thing?
Is it because we’re not living in radical obedience to Christ?

When I’m on vacation—and no one knows who I am
or what I do—I’m not going to release words from my mouth
that I normally wouldn’t.

Because if I did, I’d be saying, “Imitate me when I’m in public and
when I’m at my best. But when I’m alone, don’t watch.”

What would happen if we could be parents, teachers, pastors,
role models, disciples who can say with ease,
“I URGE you to imitate me”?

Will you join me in this goal? 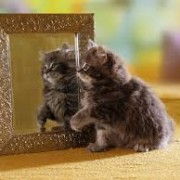 I loved playing copycat when I was a little girl.
I’d mimic and repeat everything a friend said until I drove her nuts.
Not many people enjoyed my game.

Now that I’m older (I’m 92 now) . . .
(OK, not really. I just wanted to make sure you were still reading!)
Now that I’m older, I find myself yearning to copycat Someone else.
And He loves it!

Ephesians 5:1 says, “Be imitators of God.”
Though I often fall very short, I deeply yearn to copycat my heavenly Father.

I’m discovering that the more time I spend with Him,
the more His Spirit works within me to mold me
shape me
remake me
and define me
in Him.

Wow.
That’s my desire, Lord.
Thank You for never giving up on me.
Please keep working, re-working and breaking me
until I look like You.
Amen.
How do you see God working in your life to make you more like Him?

How’s your imitation coming?
Go ahead.
Play copycat with your Father!

Have you ever felt unworthy—as though God can’t use you?

If so, you can relate to Matthew.

He was in a less-than-idea vocation, but Christ saw his potential.

He knew what Matthew could become.

Christ sees the possibilities in you as well.

He dreams big for you.

When the Master Artist invites you inside the canvas, it’s for eternity.

(From Susie’s latest book Masterpiece. Don’t buy it from Amazon. Susie sells it cheaper. Email her for info on how to get it directly from her: susieshell@comcast.net)

Earth is a theater filled with a crowded audience.
The people are packed tightly together; expectant.
Anticipating.

You’re there. Front row. Edge of your seat.
The curtains have opened.
Act One has been announced: The Beginning.

The lights shift gradually. A slight change in the hues of red and yellow. He’s not in the spotlight, but he’s standing inside the color formation, stage left. Before his lines are delivered, you know his role is important.

Without hesitation . . . right on cue . . . he doesn’t simply deliver his lines, he declares them.

MALACHI: Behold, I send My messenger before Your face,  who will prepare Your way before You.

Your eyes move to stage right where the slight change in blue and yellows directs your attention. Again, not in the spotlight but standing near the edge of the stage, another key role. Before you have time to absorb the previous lines, the following is delivered.

ISAIAH: The voice of one crying in the wilderness: Prepare the way of the Lord! Make His paths straight!

Malachi and Isaiah’s roles are complete. They’ve delivered the message. They’ve made the introduction. They now exit the stage of history, and the colored hues of lights blend into one strong yellow beam. It’s shining brightly on a wilderness setting and scene one begins.

But filling the role and now standing center stage is John the Baptist. We actually smell him before we see him. Everything about him seems strange.

Such an important role! The forerunner. The baptizer.

We shift uncomfortably in our seats. We want a well-dressed businessman. One who’s well educated in marketing. Someone who knows strategy; cause and effect; supply and demand. One who can predict trends and interpret graphs of steady growth vs. decline.

But we didn’t cast the role. And like it or not, it belongs to John the Baptist.

Again . . . strange. Before we have a chance to think too deeply about it, however, we realize we’re right inside of Mark 1:8. Right in the thick of John’s introduction.

Maybe we can get used to him. Perhaps we can become comfortable together. After all, hasn’t God always filled important roles with the least talented? Hasn’t He always used the least expected to accomplish great things? That’s one of the great benefits of being a Christ follower.

A teenage girl brings the Savior into our world.

A donkey speaks to its master.

A former Christian-killer delivers the gospel to the Gentiles.

Even so, John the Baptist may be one of the strangest. But it was Jesus Himself who declared, “among those born of women there has not risen one greater” (Matthew 11:11 NKJV).

Think about that. John smells bad. He doesn’t fit the mold. Or maybe he’s wearing mold. It’s hard to tell. But in plain English, he just stinks. He has no social skills. He’s different.

And what he eats is disgusting—locusts and other crawling things. He obviously doesn’t care about his appearance. He’s wearing . . . well, it’s . . . he’s wearing something made out of camel skin. Where are the animal rights people?

“Among those born of women there has not risen one greater” (Matthew 11:11).

What a compliment! There have been a lot of compliments given throughout time. But can you think of one higher than this?  Jesus said that John was great! That’s simply incredible. It’s amazing.

I really want this in my life.

I need this in my life.

I want to be great in Jesus’ eyes.

I have my thoughts . . . but I’d love to know yours! So join the discussion below.

(And by the way . . . a little shameless promoting. This is an excerpt from my newest book Masterpiece: 18 encounters with Christ that prove it’s all about you! Don’t get it from Amazon. I sell it cheaper. If interested, you can send me an email, and I’ll tell you how to order directly from me: susieshell@comcast.net).