Just as Pilate asked, “What then shall I do with Jesus?” each of us also has a season in our lives where we must decide what to do with the One who claims to be the Messiah. King Belshazzar, King Agrippa and others from the Bible—all had their spiritual “minute-to-win-it” and declined. How are we using our spiritual season of decision right now? Will we trust God’s plan, or will we live our lives as we desire? How can we make the most of our spiritual season? An invitation for salvation is given at the end of this session.

Session #2: “Jeopardy”
Throughout history God has chosen to use unlikely people to accomplish His great purposes. Many of us have regrets, habits or a past that convince us we can’t be used by God. Jephthah had an unfortunate lineage and shady past. Yet God chose to use him as a leader and warrior. But in the midst of moving forward, Jephthah tried to use some bargaining chips with God . . . the “If You’ll do this for me, I’ll do this for You.” By doing so, he put the life of his only child in jeopardy. God doesn’t want our bargaining chips. He wants us to trust His plan. How can we rest in the plan He has for our lives when we can’t always see where it leads?

Session #3: “The Price Is Right”
Though Jacob and Esau could have starred on “Family Feud,” we currently find them on stage for “The Price Is Right.” As the oldest child, Esau stood in line to receive the birthright from his father, Isaac. But on a whim, Esau traded his birthright for a bowl of stew. Esau cared more about fulfilling his fleshly desires than he did about assuming the spiritual role in his family’s lineage. “Delayed gratification” was a phrase he refused to accept. Instead of trusting God’s best for his life, he acted impulsively and paid for it. His brother, Jacob, knew that God had foretold he would eventually receive Esau’s birthright. But rather than trust God’s timing, Jacob manipulated the situation for his own advantage and lived a hard life. We, too, often play “the price is right” with God. When we refuse to minister to others, get involved in church or establish a spiritual foundation for our families, are we trading in our spiritual birthright for other things that are immediately more gratifying?

Session #4: “Wheel of Fortune”
Though Mephibosheth had a funny name, he wasn’t known by it. He was known by his label. He was the “handicapped one.” The few times he’s mentioned in Scripture, he’s referred to by his label. Life hadn’t been fair to Mephibosheth. Unfortunate things had happened to him that weren’t his fault. Sometimes, we too, find ourselves living with a label: “the divorced one,” “rejected,” “depressed.” But God never sees us as label. He calls us by name. Though we sometimes deal with situations that aren’t our fault (raising grandkids, the death of a loved one, losing a job, experiencing health issues), God still has a plan for us that we can trust. He yearns to fulfill us and empower us with hope, purpose and spiritual power. God spun the wheel of fortune for Mephibosheth and brought restoration to him. He desires to spin the spiritual wheel of fortune for us, too. Let’s talk about how we can trust His plan when it seems there is none.

Session #5: “Who Wants to be a Millionaire?”
Gehazi had a job many envied. He was the assistant to the prophet Elisha. We meet him three times in Scripture, and each time we cross paths with him, he shows his true colors. He was a man of greed, he lacked compassion, and he was incapable of spiritual sight because he wasn’t truly connected to Elisha’s God. God wants us to trust Him with our finances. He desires to give us compassion to help those around us, and He yearns to help us see through spiritual eyes. Will we trust Him in these specific areas in our lives? Or will we live life in our own power?

Session #6: “The Weakest Link”
Princess Tamar had never even heard of “The Weakest Link” and certainly hadn’t signed up for it. But in 1,000 B.C. she found herself as an unfortunate contestant. Though she was from a royal family, it was a dysfunctional one. Her father was King David of Israel, and her two oldest brothers were involved in a power struggle for the throne. Tamar was raped by Amnon, her half-brother. Because of this, she was seen by her culture as “the weakest link.” And even Tamar believed she was damaged goods. What happened to her couldn’t change her bloodline, but she lived the rest of her life desolate and lonely. She was still the daughter of the king. She could have lived in the palace! But she trusted the lies of society instead of placing her identity in God. We all ask ourselves. “Who am I?” Why not let God tells who we are? This session continues with restoration and wholeness as we learn that we become a band-new creation when we place our trust in Him.

Session #7: “Let’s Make a Deal”
He’s known as the wisest man in the Bible, but he sure made some foolish decisions! When Solomon first took the stage on “Let’s Make a Deal,” God was hosting the show and offered our contestant some amazing prizes: Door #1: Wealth, Door #2: Honor, Door #3: Wisdom. Solomon chose wisdom, and because he  made such a great choice, God granted him Door #1 and Door #2 as well. Through the course of the following 40 years, however, Solomon disobeyed God, married a foreign woman that led to 1,000 foreign women, began worshipping their idols, deceived people, and slowly became desensitized to the sin in his life.  God sounded several alarms, but Solomon chose to push the snooze button. God is faithful to use the Holy Spirit to give us wake-up calls when we begin sliding away from Him. What are these wake-up calls? How can we recognize them? Most Bible scholars believe Solomon wrote the Book of Ecclesiastes in his final years and aligned his life again with God. Bottom line? God doesn’t make deals. He calls us to trust in Him alone instead of putting our faith in relationships, money or materialism. Let’s take a close look at some common deals we often try to make with God and how we can discern the wake-up calls He sends.

This study sells for $89 and includes the following on a USB drive:
• All 7 video sessions
• Discussion questions to use with a small group after each session
• Downloadable study book with fill-in-the-blank note pages to keep up with the fast-paced video sessions PLUS a three-day deeper study in the Word each week during the seven weeks.

Purchase through Susie Shellenberger at: susieshell@comcast.net 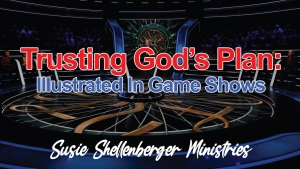 This 7-week creative Bible study features some not-so-well-known Bible characters and a few of your favorites who played games with God. We’re often to play the same games with our Creator. This is a fun—yet deep and challenging study—that will help draw participants into greater intimacy with Christ. Each session ends with a music video and an opportunity to deepen your relationship with God.

Two Minors Hit The Big League: The End Time as Seen Through The Prophet Joel...