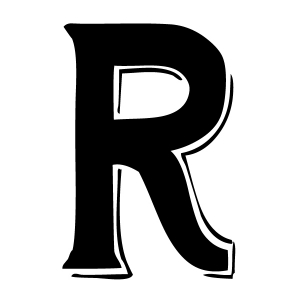 Rhoda
(Reminder: I’m doing an A to Z devotional blog.)

She’s only mentioned once in the Bible, and it’s a powerful—yet odd—little story. We meet Rhoda in Acts 12:12-16.

The scene: Herod arrested several Christians and had killed James, the brother of John. He had the apostle Peter thrown in jail and heavily guarded by four squads of four soldiers each.

The situation: Peter was attached to these soldiers with heavy chains. He eventually fell asleep. (I imagine he probably prayed himself to sleep.) But the early church . . . the band of believers . . . the early Christians were praying earnestly for him.

In prison: “Suddenly an angel of the Lord appeared and a light shone in the cell. He struck Peter on the side and woke him up. “Quick, get up!” he said, and the chains fell off Peter’s wrists.” (Acts 12:7 NIV)

Peter must have been snoring heavily and sleeping soundly, because the angel had to strike him on the side to wake him up! Can’t you almost hear the angel whispering, “Pete. Hey, Pete. Peter.” And when Peter kept snoring, the angel finally hits him: “PETER! WAKE UP!”

When I get to heaven, I want to meet that angel.

“Then the angel said to him, ‘Put on your clothes and sandals.’ And Peter did so. ‘Wrap your cloak around you and follow me,” the angel told him.   Peter followed him out of the prison, but he had no idea that what the angel was doing was really happening; he thought he was seeing a vision.   They passed the first and second guards and came to the iron gate leading to the city. It opened for them by itself, and they went through it. When they had walked the length of one street, suddenly the angel left him.” (Acts 12:8-10 NIV)

Peter reaches the house where the believers are praying, and he knocks on the door. They hear the knock but ignore it. After all, isn’t praying for Peter’s release more important than answering the door?

Knock Knock.
Who’s there?
Peter.
Peter who?
The guy you’re praying for!

It was a slave girl named Rhoda who actually answered the door. And it was Rhoda who was so excited to see the result to their prayers, she shut the door and quickly announced who it was.

It was Rhoda who was made fun of by the praying believers. (Obviously, they didn’t believe their prayer would actually be answered!) And it was Rhoda who continued to announce Peter’s arrival until the little group of Christians finally opened the door again and brought him inside.

I’m thankful for believers such as Rhoda who get excited about receiving God’s answers to prayer. Do we?

On another note: I have developed two Bible studies that many churches are using for small groups: “Trusting God’s Plan: Illustrated in Game Shows” and “Two Minors Who Hit the Big Leagues: The End Times Through the Eyes of Joel and Zephaniah.”

Both are seven-week studies available on a USB drive. The group watches the 30-minute session together then uses the discussion questions.

If you’d like to receive detailed information regarding the content of these studies, please email me: susieshell@comcast.net