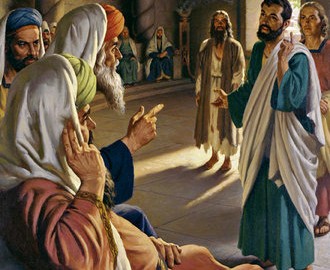 “When the council saw the boldness of Peter and John,
and could see that they were obviously uneducated,
non-professionals, they were amazed and realized what
being with Jesus had done for them.” (The Living Bible)

Last week we chatted about Peter and John healing the lame man who was sitting on the steps of the Temple.

After being healed, he jumped up!
He ran around the Temple courtyards.
He began shouting and praising God.

Can you imagine?
Muscles, tissues, ligaments, sinews that had never worked before—
now suddenly in motion.

Ooops!
All this commotion drifted to the Sanhedrin Council.
When THEY heard about it, they were furious!

They were furious, because they’d told Peter and John—
and the rest of the disciples—not to talk about Jesus anymore.

“He’s dead.
It’s over.
This Christianity thing is never going to get off the ground.
We demand your silence!”

They were used to intimidating the disciples.
They knew the disciples were a
timid
weak
frightened
group of men.

Where were they when their LORD was crucified?
They fled.
They were scared.
They ran for their lives.
(Except for John—who stayed with Jesus’ mother during the crucifixion.)

So the Sanhedrin Council is thinking,
Bring them in again, and we’ll lower the boom.
How should it go down this time?
Should we shackle them first?
Maybe we’ll starve them a few days before confronting them.
Should we bring out the cat-of-nine-tails?
How should we deal with them this time?
But this time . . .
when Peter and John stood before the Council,
they didn’t nervously shift their weight from foot to foot.

Their eyes locked intently into the eyes of the Council.
And when they spoke, it was with such determination,
such confidence.
This time, their words were articulate.
Dynamic.
Filled with power.
They stood with boldness.

There was such a DIFFERENCE in Peter and John
that the Council began arguing between themselves:

That’s the difference the Holy Spirit makes in our lives.

God is not into recovery; He’s into complete restoration.

He wants to sanctify us wholly to live holy lives.

Yes, Peter and John had been with Jesus.
And the difference in their lives was so astonishing that even the Sanhedrin Council noticed.

But it wasn’t simply being with Jesus that made the difference.
It was the Holy Spirit’s power being released in every area of their lives.

It was the fact that Peter and John had completely yielded to the authority of Christ. They had “died to themselves” and were genuinely living in the power of the Holy Spirit.

That same mighty power—
the power that healed a lame man
and caused the blind to see . . .

The same mighty power that raised a dead man to life . . .
is YOURS to live in every single day of your life!

Yes.
You may be a Christian.

But are you living in this kind of power?