As I count my blessings this Thanksgiving,

God, the Father, who created all things and who loves me

enough to send Jesus, His Son, to save me from my sin

and to die for me and grant me mercy, grace and forgiveness—

and the Holy Spirit who guides me daily

and reminds me of the Truth in Scripture

and who empowers me to live the Christian life.

I’m grateful beyond words that Christ is ALIVE—

that He actually conquered death

and is preparing an incredible home for me in heaven!

I’m so thankful for godly parents who have given me a wonderful spiritual heritage . . .

and my godly brother and his family

who love me and pray for me,

and for godly friends with whom I can discuss spiritual truths

for reading my little blog week after week

and praying for me when God prompts you.

You’ll never know what a difference your prayers make

when I’m exhausted and lonely in a hotel room

and miles from home.

I’m thankful for the smell of brand-new shoes,

all the primary colors,

the sounds of my two dogs

Stephane’s yummy tossed salad that no one can make like her,

Kent’s special stash of cokes-made-with-sugarcane-sugar-in-a-bottle stored in the garage fridge,

and even the annual Thanksgiving family Ping-Pong tournament

that I never win.

What are YOU grateful for? 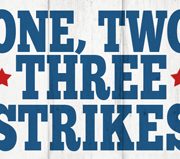 We all know that three strikes = an out.

in which three strikes are used.

King Joash began his reign as a godly little 7-year-old who had been raised by the priest Jehoida. For most of Joash’s life, he did what was pleasing in the Lord’s sight. It wasn’t hard, because he had his very own priest guiding him.

But the end of Joash’s reign didn’t end so well.

Joash (also known as Jehoash) visited the prophet Elisha to inquire about Israel’s future. Elisha told him to shoot an arrow to the east indicating victory over the Syrians.

Then Elisha told him to take his arrows and strike the ground.

King Joash struck the ground three times, then he stopped.

Elisha rebuked him: “You should have struck the ground five or six times!” he exclaimed. “Then you would have beaten Aram until it was entirely destroyed. Now you will be victorious only three times.”

When we make the same mistake—by stopping too soon—two things happen:

1. Our Spiritual Growth Is Stunted

We settle for less than God desires.

It’s easy to become complacent and indifferent in our relationship with the Lord. We aim too low spiritually.

It becomes easy to place our spiritual lives in survival mode

instead of moving in dynamic spiritual growth.

2. The Mission of Christ Is Limited Through Us

The enemies of God (Moabites) would soon invade Israel after this event. When we stop too soon, we can cause the church (God’s people) to move backward instead of forward.

Guess who NEVER stops too soon?

He is always working overtime to thwart God’s people

Though Joash had been mentored spiritually by godly Jehoida,

after the priest’s death, Joash turned to idol worship.

When Jehoida’s son tried to get King Joash back on the right path, Joash sentenced him to death by stoning him.

Without God’s support, Joash didn’t have the military success he once had, and he was seriously wounded in battle when defeated by Syria. Not long afterward, King Joash was assassinated in his own bed by three of his officials.

Let’s not make the mistake of taking a wrong turn off of the narrow road that Jesus describes in Matthew 7:14.

Let’s determine together to be diligent!

God is looking for disciples who refuse to give up,

who will go the extra mile,

and who will live with a faith that moves mountains.

Will you join me in answering this call?

This weekend (in Temple, TX) is my last time to speak this year—

not by choice . . . but simply because churches don’t tend to

schedule extra events during the Thanksgiving and Christmas season.

Though I’m looking forward to a much-needed break,

I’m not excited about no income coming in during the next month.

The Christmas season can be a tough time for evangelists.

Will you pray for me?

If God prompts you to donate to the ministry He had entrusted me,

Beginning in January, I’ll be sending out a weekly one-minute video
devotional video clip called “Real Truth, Real Fast.” I’m really excited
about and would appreciate you helping me pray about the content.

I want to continue to provide inspiring thoughts, Scripture and
challenge (as I’ve done with video devotionals in the past), but I also
want to motivate us to always go deeper in our relationship with Christ.

#1 Thing: If you’d like to schedule me to speak in your church,
please send me a message, or talk with your pastor and have him
contact me. Here’s what I typically do on a weekend:

This gives me a total of five times to speak, and I’m seeing God do
tremendous things during these renewal weekends.

#2 Thing: If you’d like to participate financially to the ministry in
which God has entrusted me, I’d really appreciate it. You can use
PayPal on my Website, or you can send a check to:

I will send you a tax receipt, because I’m a 501 C-3.
(This means your donation is the same as donating to a church.)

#3 Thing: Did you know that by subscribing to my email newsletter,
my YouTube channel and shortly my other social network handles,
that you can help support this ministry and help it grow? Right now
I would especially like your help in growing my Youtube channel.
Simply visit the channel and click the “SUBSCRIBE” button. This is
Free and easy to do! My first goal is to reach 100 subscribers. Can
you help me reach this first goal? Perhaps you could share my videos
and channel with your friends? That would be a big help!

Please know that I love you and pray for you!

When a dead man’s body was quickly tossed into the same grave as Elisha’s bones, the dead man immediately came to life, stood up and walked out of the cave-grave.
It’s a fascinating two-verse story found in 2 Kings 13:20-21.
Last week I mentioned that we can learn three important things from this little story. See last week’s blog for the first two. We’ll end the story with this final thought that we can apply to our lives.
Thing #3: God is using this truth to awaken US today!

Think about it: Have you ever made a dead man come alive?

Each one of us who have a genuine relationship with Christ should be reflecting His Spirit in our lives so much so that when non-believers come in contact with us, they can see Christ exemplified.

Are we seriously walking in the power of the Holy Spirit?

Are we bringing others into the knowledge of the resurrecting power of Christ?

Christ is still raising the dead.

And I’m convinced He wants to raise the spiritually dead people—who come in contact with us—to life in Him.

It’s connected to Cincinnati. Thank you in advance for your prayers of God’s blessing and ministry!

After Elisha the prophet was buried (and a few years had gone by), some Israelites were burying a man but noticed a gang of raiders quickly approaching. Knowing time was short, they quickly tossed the dead man’s body inside the tomb of Elisha and ran for safety.

The body of the dead man touched Elisha’s bones . . .

and that’s where this little two-verse story takes a fascinating turn!

Coffins weren’t used by the Jews.

and the mouth of the cave was shut by a large stone.

What can this interesting little story teach us?

Thing #1:  Through giving life to the dead body through Elisha’s bones, God confirmed the authority and ministry He had given Elisha. We hope those who witnessed this miracle embraced

God had promised Elisha that He would give him a

“double portion” of the power that He had given to Elijah.

This final miracle fulfilled the promise of the “double portion.”

Thing #2:  This story also shows us that by Christ’s

death and burial, Christians can view the grave as a calm

and peaceful passage to eternal life.

We don’t need to fear death.

We will live forever with Christ.

Thanks so much for your much-appreciated prayers!