You are here: Home / Random Thoughts / Could You Be a Yertle? 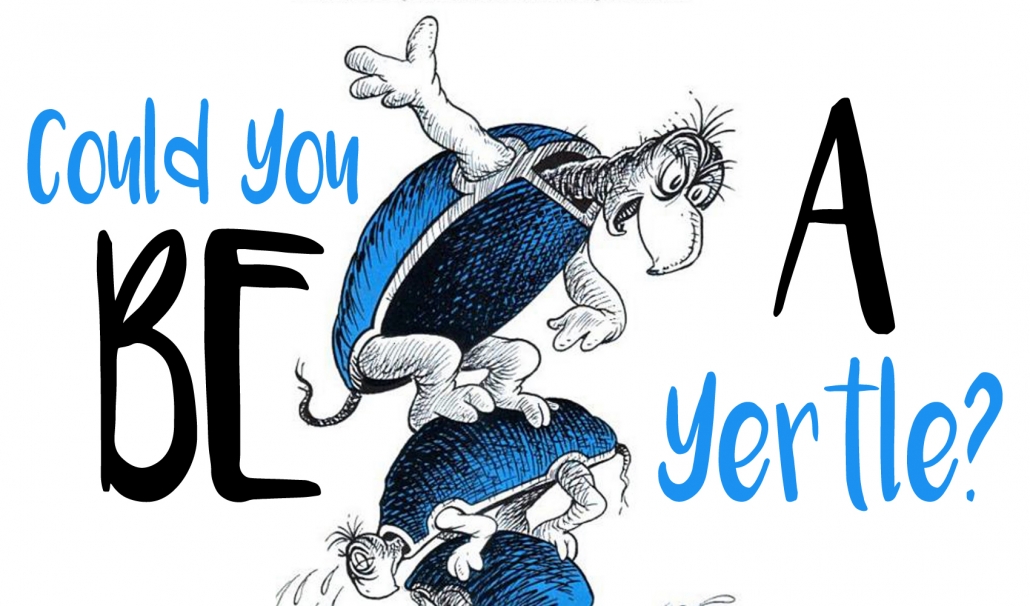 One of Dr. Seuss’s more famous poems is called “Yertle the Turtle.” As the poem progresses, Yertle wants to be more and more powerful. He wants to rise higher so that he can have more—to see and to rule over.

Are you hearing echoes of the Tower of Babel?
King Nimrod wanted to be famous, so he convinced the people of Babylon to build a great tower that would reach heaven. (See Deuteronomy 32:8-9.)

Yertle the Turtle’s biggest problem was that he didn’t think anybody should be higher than he was.

Are you hearing echoes of a conversation the disciples had in Matthew 18: 1-4 Each one of them wanted the position of sitting at Christ’s right hand when He set up His Kingdom.

Each thought he deserved it.
How did Jesus respond to their argument?

“Jesus called a child over and had the child stand near him.

Then he said: ‘I promise you this.

If you don’t change and become like a child, you will never get into the kingdom of heaven.

But if you are as humble as this child, you are the greatest in the kingdom of heaven.’ ” (Matthew 18:1-4 CEV)

In other words, “Stop being Yertles! Quit consuming yourselves with whom will be the greatest in the Kingdom of heaven, and concentrate instead on getting in!”

When we’re willing to humble ourselves to the point where we think of ourselves as having little value within us, but instead come before God with the gentle openness of a little child … then God can use us.

Mother Teresa said it this way:

“I’m just a pencil in the hand of God.”
—Mother Teresa

In other words: I’m only useful as God uses me and writes His will with my life. I’m just a tool… and I pray that God uses me!

And if we truly want to be valuable, important, and of influence in the Kingdom of heaven, Jesus is whom we need to imitate.

And God’s promise to us is that when we humble ourselves as Jesus did… He will lift us up. And this requires consistent surrendering. Not just a one-time surrender. But surrender today. And tomorrow.

“All to Jesus, I surrender
All to Him I freely give.
I will ever love and trust Him
In His presence daily live.

God Is Depending on You