No Reserve, No Retreat, No Regret

You are here: Home / Random Thoughts / No Reserve, No Retreat, No Regret

William Borden’s parents gave him a trip around the world as a high
school graduation present before he entered Yale as a freshman. The
name BORDEN is probably familiar to you. William was an heir to the
Borden fortune.

A few years earlier, he had accepted Christ through the ministry of
evangelist D.L. Moody. As William traveled Asia, the Middle East and
Europe, something happened inside of him; he sensed a growing
burden for the lost to come into relationship with Christ.

In a letter to his folks, he stated that he wanted to be missionary, and
when a friend heard the news, he responded that he’d be throwing
his life away.

After returning from his trip around the world, William entered Yale
University, graduated and then studied and graduated from Princeton
Theological Seminary. When he completed his studies, he boarded a
ship for China to serve as a missionary. But because of his passion to
reach the Muslim people, he stopped in Egypt to learn Arabic so he
could effectively communicate God’s truth.

While in Egypt, 25-year-old William contracted spinal meningitis.
Within a month, he was dead.

Word of his death was cabled back to the U.S., and almost every
American newspaper covered the story. His biography stated: “A
wave of sorrow went around the world . . . he not only gave up his
fortune, but himself to be a missionary.”

Yes, William had left his wealthy fortune to spread the Gospel of
Christ. And though most people accepted this as a tragedy, God used William’s death to do more than William could have ever done alive.

Thousands of young men and women who read his story in
newspapers across America, were motivated to leave everything
behind and give their lives to take the Gospel around the world.

When William’s parents opened his Bible, they found three
unforgettable phrases: (1) No Reserve. He wrote those two words
right after he left his wealth to become a missionary.

After William’s dad told him he’d never work again in the Borden
company, William had written (2) No Retreat in his Bible.

And after he’d contracted the disease that killed him, William wrote
these words a few days before dying in Egypt: (3) No Regret.

His life certainly wasn’t a waste from God’s point of view!
The Master used William’s life and death to call thousands of young
adults to leave all they had and commit their lives to taking the
Gospel around the world.

More people were reached through William’s story than William would
have ever reached in China by himself.

What if you and I lived with these three phrases as well?
Whatever you’re facing right now, No Reserve! Instead of running
away, hiding or giving up, continue to move forward and live in God’s
embrace.

And instead of choosing what’s easy this week, realize that God’s will
isn’t always easy! But continue to follow His leading anyway with the
mindset of No Retreat.

Hopefully, your goal at the end of this week (and at the end of your
life) is to be able to say No Regret. So choose to live the abundant
life God has for you right now!

No Reserve.
No Retreat.
No Regret.

I’d appreciate your prayers this weekend as I speak in Mount Vernon,
Ohio. And if you haven’t purchased by new book Divine Redirection,
you can do that now. Some churches are already using it as a small
group study (discussion questions are available for each chapter). 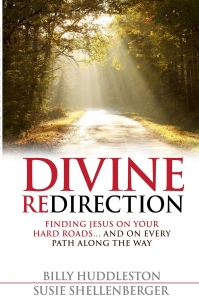 You can grab a copy from me by sending a check for $15 (plus $5
shipping) made out to Susie Shellenberger Ministries and mailed to
me at: 7012 N. Lake Front Drive; Warr Acres, OK 73132